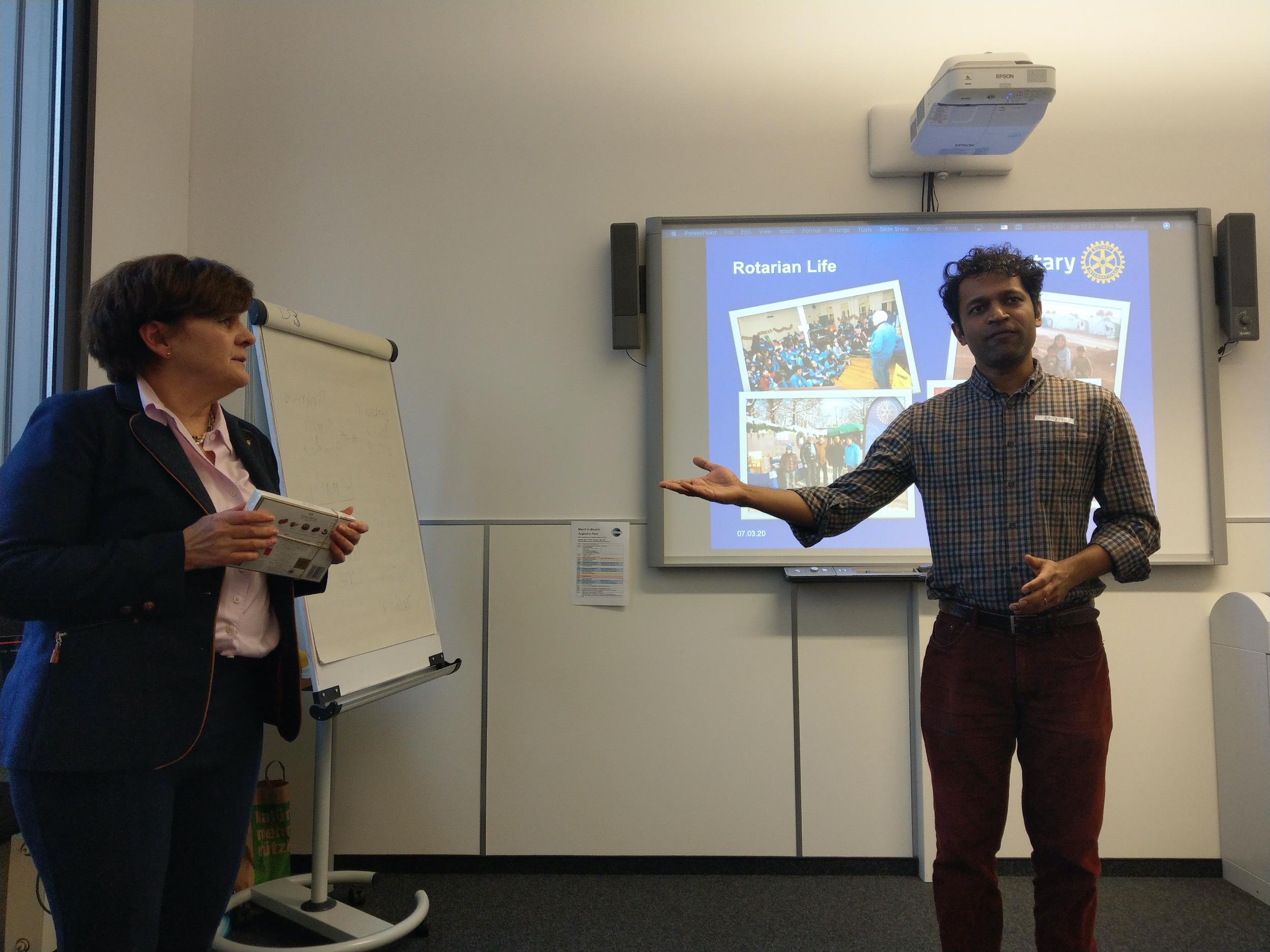 Area Directors Mikaela Gallon (D1) and Livia Balacescu (D3) want to extend their gratitude to all volunteers and participants for making this conference such a fun and engaging event.

Around 60 Toastmasters and guests attended the Toastmaster Conference and Contests of Areas D1 and D3 last Saturday. Our host was the European Business School, a long-term collaborator of the Toastmasters in Bavaria, whose values we strongly identify with: education and leadership.

We had a day full of fun and inspiration sparkled by our keynote speakers!

Viktoria Korzhova, co-founder of 15×4 Munich, invited us to join their upcoming science slam events.  Sibylle Tafel, film director, taught us to be the directors of our projects and lives: handling a variety of resources just-in-time is something every leader needs to master!

Gisela Bolbrügge from Rotary International shared slices of their activity. 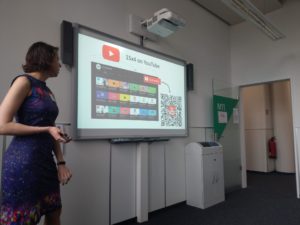 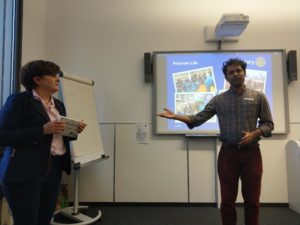 What a great opportunity for the Toastmasters community to partner up and engage in bigger and impactful projects!

We also learned some great news: a new Toastmasters club will start in Freising. More on www.freising-toastmasters.de

The Russian speakers in Munich will be the first Germany-based community to experience Toastmasters. Get in touch with Oleksander Taran to find out more. 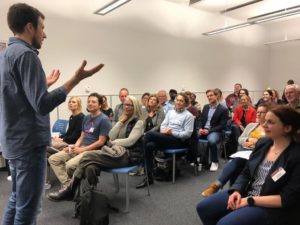 Big news: the Russians are coming! And the toastmaster community can’t wait for it!

The English International Speech Contest was chaired by Jasmin Ghennam, a young and super engaged Toastmaster. Isil Uysal Calvelli,  President of Munich Prostmasters, took over the role of Chief Judge and ensured that all judges were briefed and everyone followed the contest rulebook. 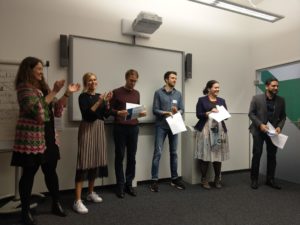 The winners of the English International Speech Contest

Elena Marsh was the Contest Chair of the English Evaluations Contest and had support from Chief Judge Lorenzo Gios.

The English Table Topics Contest was chaired by Isil Uysal Calvelli and Lorenzo Gios was the Chief Judge.

Area D1 will be represented by Ralf Grabuschnig (Munich Toastmasters). The second place was taken by Kumar Barua (Munich Prostmasters) and the third to Oleksandr Taran (TFM). 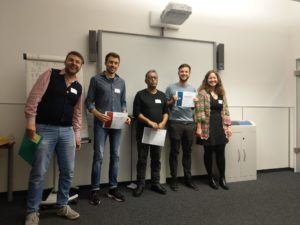 The winners and the officials of the English Table Topics contest – area D1.

Area D3 will be represented at the Division level by Dominik Strebel (Effective Communicators), whereas Judith Odu (Brainstormers) took the second place. 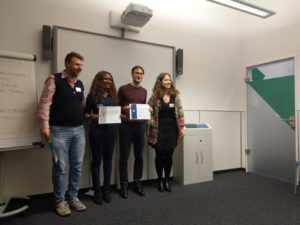 The German Speech Contest was chaired by the charismatic Naomi Susan Isaacs. She had support from the Chief Judge Hongnan Sun, president of the Munich Chinese Club.

Siegfried Ott (Brainstormers) won the Area D3 Contest and will compete in Fürth.

The winners of the German International Speech Contest

Anna Fleckenstein powered up the audience better than all 10l of coffee consumed at our event. She chaired the German Evaluations Contest (Bewertungsredewettbewerb), while Georg Scheller was the Chief Judge.

The D1 Bewertungsredewettbewerb was won by Dominik Strebel (Prostmasters). Karla Viebahn (MEAT) came second. The contestants were moved by the target speech of Darcia M’Barna on domestic violence. Andreas Beckenbach (Brainstormers) and Jan-Philipp Schleutker (Speakers Corner) offered their feedback too, but were disqualified because of time issues. 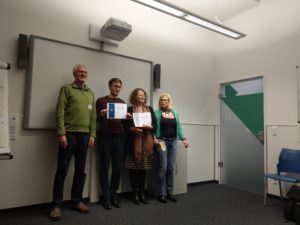 The winners and contest officials of the German Evaluation Contest 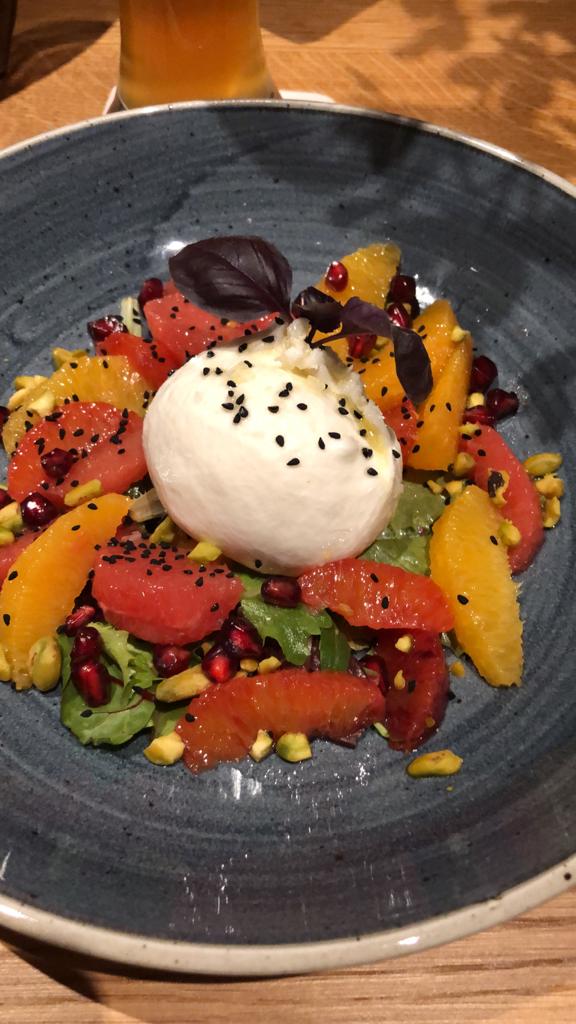 The rainbow after the storm: our dinner

The evening ended at Fräulein Wagner. We had a blast!

All the feedback form respondents claimed to have met new people whom they will keep in touch with.  The average feedback for the contest organization was rated 4.6/5 and the contestants were widely considered by the audience to be professionals in the art of rhetoric. Our special guests Viktoria Korzhova and Silbylle Tafel got also compliments for their contributions. The logistics- the goodies we shared, the location accessibility and space, the session timing got also very good and excellent grades.

If you want to get a similar portion of Toastmastering or recommend some Toastmastering to your friends, our neighbour Bayern-based Area D2 (Stephanie Hobert) will be hosting a similar Conference & Contest event next Saturday:

Looking forward to seeing as many Toastmasters as possible there!

P.S.: the good, the bad and the ugliest. Here’s all the photos we have so far: https://www.dropbox.com/sh/kar1yxsllgryih9/AAAI4xqPHF7mgrt0P5CbCE7oa?dl=0

Want to share your lucky shots? Get in touch with Livia.

P.P.S.: some behind the scenes info: Toastmasters works based on volunteering. You can meet new people and work on your leadership skills if you engage in the organization of the upcoming events!